The Monastery of Great Lavra

The Holy and Great Monastery of Vatopedi

The church of Protaton 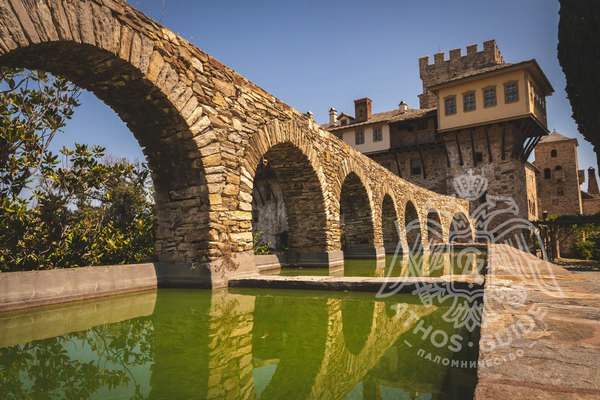 Due to its geographical location, Mount Athos, starting from the early Christian era, was a place of attraction for many monks who came here from all over the great empire.

At the end of the 3rd century, there was a tendency to move away from settled communities to desert areas, which subsequently took hold and marked the beginning of the development of monastic life. The only value of existence is the soul, and the whole world with its benefits did not matter in view of the fact that any values depreciate if you lose a priceless soul.

Athos, neighbouring to such important Christian centers as Thessaloniki, Philippi, Amphipolis and Apollonia, should have adopted the Christian faith quite early; its inhabitants, for the most part, must have been Christians already in the 4th century. The peaks and slopes of Athos were the best suited for ascetics. The lack of mention of monasticism on Athos during this period of time can be explained by its special nature of solitude and modesty.

The period of the spiritual life of Greece from 400 CE to 800 CE remains poorly covered in written sources. Those who wanted to become worthy to stand before God faced a fierce struggle with the temptations of the outside world. As Christ proclaimed, during this struggle, special control is needed over one's desires and over the methods of achieving them. Whoever wants to follow His path must deny himself, take up His cross and follow Him in order to gain heavenly riches. It was these principles of high ethics and morality that formed the basis of the life of the first Christians, who wished to remain in strict asceticism and severity, renounce the blessings of earthly civilization and concentrate on fasting and prayer.

According to written sources, groups of ascetics have been present on Mount Athos since 843. In 883, a special decree of Emperor Basil I was issued, regulating the internal structure of the peninsula. The 10th century is considered to be the beginning of an organized monastic state. It was during this period that Saint Athanasius the Athonite lived here. The chronicle of Athos is a centuries-old history, the legacy of which is carefully preserved in the archives of the Holy Mount monasteries. Today, there are 20 monasteries on Mount Athos: 17 of them are Greek, the Hilandar Monastery is Serbian, the Zograf Monastery is Bulgarian, and the Monastery of St. Panteleimon is Russian. The hierarchy of monasteries, in accordance with which they are presented (including on our website), was approved in the 18th century.

The monasteries of Athos are architectural complexes resembling defensive structures surrounded by an impregnable wall, in the center of which the main temple or catholicon always rises.