Annunciation of the Blessed Virgin Mary 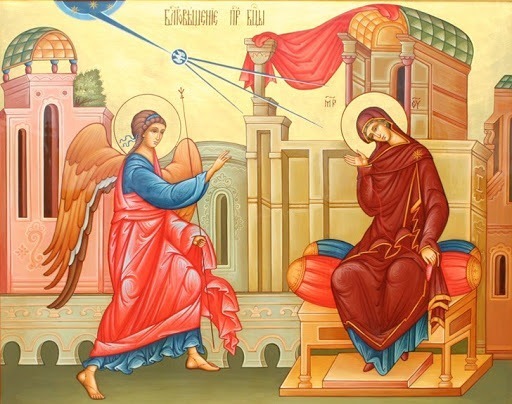 According to the Evangelist Luke, the Annunciation took place six months after the miraculous conception of John the Baptist by Elizabeth, the wife of Zechariah, when the archangel Gabriel was sent by God to the Virgin Mary to announce to Her that she would bring the Son of God into the world. At that time, Mary lived in Nazareth, Galilee, and was engaged to the carpenter Joseph.

“In the sixth month of Elizabeth’s pregnancy, God sent the angel Gabriel to Nazareth, a town in Galilee, to a virgin pledged to be married to a man named Joseph, a descendant of David. The virgin’s name was Mary.

The angel went to her and said, “Greetings, you who are highly favored! The Lord is with you.”

Mary was greatly troubled at his words and wondered what kind of greeting this might be.

But the angel said to her, “Do not be afraid, Mary; you have found favor with God. You will conceive and give birth to a son, and you are to call him Jesus. He will be great and will be called the Son of the Most High. The Lord God will give him the throne of his father David, and he will reign over Jacob’s descendants forever; his kingdom will never end.”

“How will this be,” Mary asked the angel, “since I am a virgin?”

The angel answered, “The Holy Spirit will come on you, and the power of the Most High will overshadow you. So the holy one to be born will be called the Son of God. Even Elizabeth your relative is going to have a child in her old age, and she who was said to be unable to conceive is in her sixth month. For no word from God will ever fail.”

“I am the Lord’s servant,” Mary answered. “May your word to me be fulfilled.” Then the angel left her.

The church event of the Annunciation is also mentioned in the Quran, the holy book of Muslims, in surah 19:

He said, “I am only the messenger of your Lord, to give you the gift of a pure son.”
She said, “How can I have a son, when no man has touched me, and I was never unchaste?”
He said, “Thus said your Lord, `It is easy for Me, and We will make him a sign for humanity, and a mercy from Us. It is a matter already decided.'“

The significance of the Annunciation of the Blessed Virgin Mary

According to St. Maximus the Confessor, "The Annunciation is God's intercession and consolation given to people through His incarnate Son."

The Annunciation is the correction of the events that took place at the beginning of the creation of man in the paradise of Eden. There, with a woman, the fall and its consequences began; here, with a woman, all good began. Thus, the Virgin Mary is the new Eve. So the error of Adam and Eve was corrected.

The angel went to her and said, “Greetings, you who are highly favored! The Lord is with you.”

The Mother of God is called "Gracious" and is characterized as "Blessed" because God is with her.

According to St. Gregory Palamas and other holy fathers, the Mother of God was already “Gracious”, and did not acquire this status precisely on the day of the Annunciation. Remaining among the saints of the Temple, She herself achieved the holiness of the saints and their spiritual life, which, in essence, is deification. 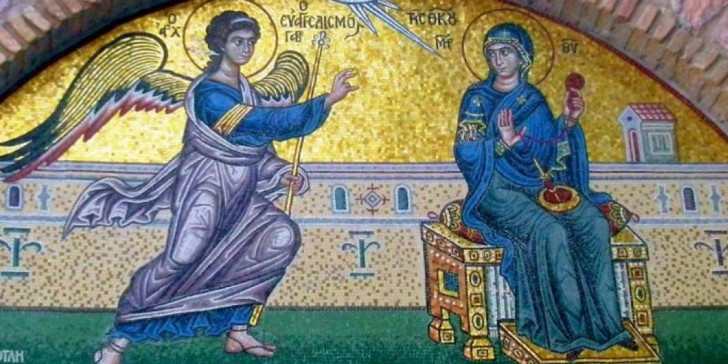 If the Temple courtyard was for the new converts and the main Temple was for the priests, the Holy of Holies – is for the high priest. It was there that the Mother of God entered; a sign that she had achieved deification. It is known that in the Christian era, the narthex was intended for the catechumens and the unclean, the main temple for the clergy, members of the Church, and the holy of holies for those who achieved deification. Thus, the Holy Mother of God has achieved the status of "Blessed" even before She was visited by the Archangel.

The choice of Virgin Mary to become the mother of Christ was based on Her righteous life. The purity of Her soul became the driving force, "attracting" Divine love. In Her person, we observe the participation of man in the process of salvation.

The answer of the Mother of God to the message of the Archangel that she would have the right to give birth to Christ was expressive: “I am the Lord’s servant,” Mary answered. “May your word to me be fulfilled.” (Luke 1:38).

This shows the obedience of the Mother of God to the word of the Archangel, but also her obedience to God in an event that was paradoxical and strange for the human mind. Thus, She submits her logic to the will of God.

We are not sufficiently aware of the response of the Mother of God to the Divine call. There is a superficial opinion that “to agree to become the Mother of God is “easy” – this is exactly what many people think. This hasty conclusion misses the further development of events, the Passion of Christ and His crucifixion.

During the Annunciation, the Mother of God is faced with something unknown. She is asked to say "yes" to an event that will push Her into exile and possibly her own death. Do not forget that getting pregnant while being unmarried in those years meant accepting an execution from stoning. The Mother of God, however, does not hesitate. Knowing that this is the call of God, She submits to His will, knowing that the price may be death. This is how the image of the Mother of God is revealed: She is accepting martyrdom, even if it is not physically happening at the moment, being fully aware of the likelihood of just such a development of events.

The meaning of the Annunciation of the Virgin

The Annunciation is the fulfillment of the eternal will of God for the salvation of the world. God, as many Fathers of our Church teach, will come into the world as a man, despite the fall of man. Saint Maximus the Confessor even notes that the incarnation of Christ, the beginning of which is the Annunciation, is the last phase of the creation of man.

In other words, God will definitely come into the world to decisively push man to achieve his originally set goal: the creation of man "in His likeness."

Annunciation and the Old Testament

The Annunciation was announced in advance in the Old Testament, in God's promise to the firstborns after their sin, that the offspring of a woman would crush the devil. Our Church sees in this the prophecy of the Annunciation. After all, it is the Mother of God who gives birth to the One who crushes the devil. So, in the creation of man there is already the beginning of the Annunciation.

Through Christ, who incarnates in the Mother of God, sin is removed and the gates of Paradise open again. Man experiences his salvation through Christ: the opportunity to truly meet God again.

Skete of the Annunciation of the Blessed Virgin on Mount Athos

The Skete of the Annunciation of the Blessed Virgin on Mount Athos is subordinate to the Xenophontos Monastery and was founded in 1755. During its heyday there were 25 kalyvas and 80 monks.

Holy icon of the Annunciation of the Virgin

The Archangel's head is tied with a ribbon. This ribbon symbolizes The Jesus Prayer.  Archangel Gabriel holds a staff in his hands, which means that the Archangel plays the role of a messenger. He does not hold a flower, as in some images of the Western church - this is a romantic approach, and such an image is not found in Orthodox icons.

The Mother of God is depicted sitting on a throne; this pose depicts confidence. The open hand of the Virgin indicates a gesture of acceptance. Acceptance is also expressed by the tilt of the head. This slight tilt, along with an open palm, seems to say "I accept my fate."